When I step through code in a debugger it usually means I’m trying to understand why that code behaves differently than expected. In such situations I especially want my IDE to present me only with data relevant to the problem at hand. Unfortunately my IDE doesn’t have a crystal ball that tells it what context I’m in and what data is relevant in the given context. The IDE just displays variables used in the code and allows me to evaluate custom expressions to dig things further. Sadly displayed data often tends to either be meaningless in the given context or contain a lot of noise that I have to filter out by myself risking overlooking significant pieces. Moreover evaluating expressions while being invaluable also means manual work, I have to open evaluate expression dialog and type in the expression risking losing focus of the main problem. To sum it up I want to be presented only with relevant data and I want it to be presented in a meaningful way. This doesn’t sound feasible without me helping my IDE. Fortunately my IDE, IntelliJ IDEA, has a really useful feature called custom type renderers that allows me to provide that necessary help to my IDE. Let’s see how those custom type renderers can help debug things.

Let’s imagine a simple scenario where we calculate an important value based on a price plan and event duration:

This piece of code works as it should until one day we notice strange results coming out of it. Fortunately we are able to capture inputs that allow us to reproduce the problematic scenario:

Not being able to deduct where the problem lies by reasoning about the code we run it through a debugger. Based on the inputs we assume that PricePlan.REGULAR and a duration equal to 2 hours 10 minutes (in milliseconds 1) is passed in to the estimateCost method.

The debugger shows us that we indeed pass in PricePlan.REGULAR as the first parameter and some duration as the second one. Unfortunately the way org.joda.time.Duration value is presented to us is meaningless, thus we have to manually evaluate an expression to get the data we need:

We can see that event duration is equal to 1 hour 10 minutes instead of 2 hours 10 minutes. Before we dig into the why, let’s focus on how can we make this information easily accessible by using custom type renderer. Let’s create one that displays org.joda.time.Duration values as a result of the following expression:

Now the data displayed by the debugger starts being useful:

Having significant data on the first plan let’s go back to analyzing why the duration of an event that starts at 1:30 Warsaw Time and ends at 3:40 Warsaw Time is 1 hour 10 minutes instead of 2 hours 10 minutes.

As I mentioned in the beginning it’s easy to overlook important data when you are filtering out noise by yourself. You want that noise to be automatically filtered out. Given character sequences as long as 2016-03-27T01:30:00.000+01:00 and 2016-03-27T03:40:00.000+02:00 you probably focused on making sure that they represent the same day and then extracting hours. Since both dates were in the same time zone chances are high you simply ignored time offsets. Of course you can alter the way dates are represented so they are easier to grasp and analyze but since you already know where the problem lies let’s make the debugger clearly say it by rendering org.joda.time.DateTime values as a result of the following expression:

Yes, you guessed it right, there was a time change between the start and the end of an event:

On 27 March 2016 at 2:00 in Europe/Warsaw time zone clocks are turned forward by 1 hour to change from Central European Time to Central European Summer Time “so that evening daylight lasts an hour longer, while sacrificing normal sunrise times”2. Now the debugger clearly says it but at the same time makes it hard to figure out what time those org.joda.time.DateTime values represent:

Let’s make that information easily available by further configuring org.joda.time.DateTime type renderer, this time focusing on how those values are represented after node expansion in the data view: 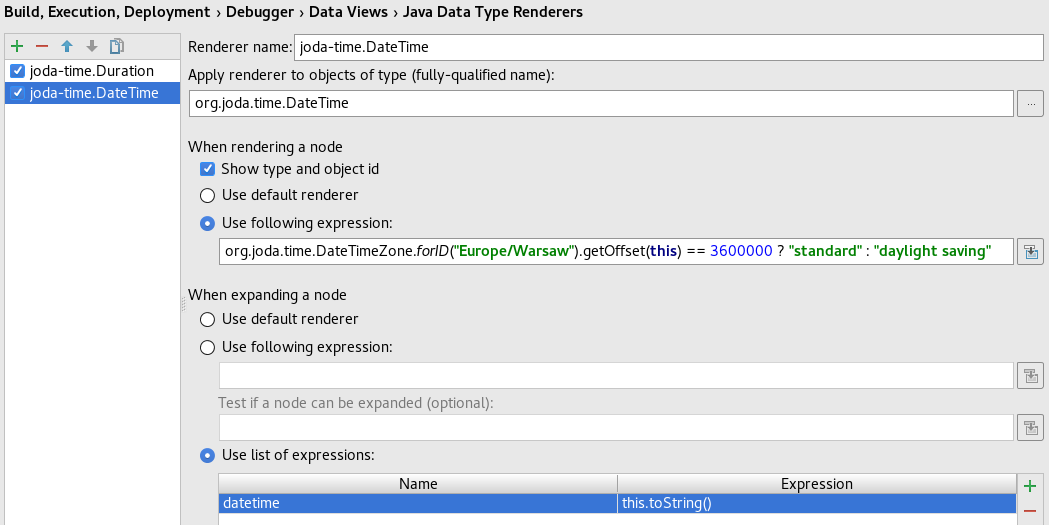 With the simple this.toString() expression we get exactly what we need: